The granting of small Christmas wishes is set to make a big impression on the 80 children in the Children’s Village. The voluntary campaign was set up and organised by Zumtobel Group employees on their own initiative. Over the past two weeks, the focus of attention at the company’s sites in Dornbirn has been on Christmas trees decorated with baubles and the letters to Santa written by the children.

Employees were invited to remove the letters and replace them with presents placed under the tree. These included items such as a picture frame with picture, a green pen, Lego and books.

“We were surprised by the huge popularity of this campaign. All the letters to Santa were gone within a few days. A large number of colleagues took part and made sure that the children’s wishes were granted,” said a delighted Patrick Lorenz, Zumtobel Group employee and one of the initiators of the Christmas gift campaign.

Sylvia Steinhauser from the Vorarlberg Children’s Village expressed her appreciation: “We’re so pleased with the Zumtobel Group’s Christmas campaign and would like to thank all the employees involved. I’m sure we’ll be able to spread great joy among the children on Christmas Eve. The Zumtobel Group Santa has done a fantastic job and will make the children’s eyes sparkle with delight!" 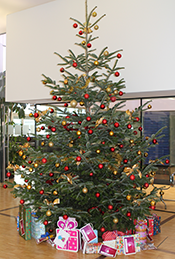 One of the Christmas trees with presents for the children.

Presents were handed over at the Vorarlberg Children's Village.
© Zumtobel Group AG 2020    -   ausgedruckt am:  Help Sitemap Impressum Privacy Statement Terms of use